I had to take the car in for an oil change this morning. Coming back up the street, I saw that my neighbor lady was working on a flower bed next to the curb. Also digging around in the flower bed were two industrious chickens. 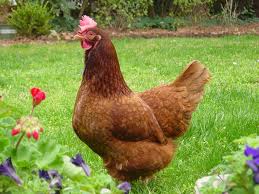 (Borrowed image)
I knew there were chickens living over there on the other side of the wooded lot because I could sometimes hear them clucking. I really wanted to meet them, so I stopped the car and jumped out to get a closer look. The owner, Catherine, was happy to share her love of the little assistant gardeners. The soil she had turned over was being meticulously inspected at close range by the pair. One was a Rhode Island Red and the other name I forget, but it was a pretty golden color with black specks on the head and shoulders.

After a few minutes, the golden bird suddenly turned around and started marching back to the coop behind the house. Catherine said, "I think she's probably going to lay an egg." Sure enough, several moments later, the successful hen started cackling loudly as if announcing her accomplishment. ( She said that with her three hens she gets two or three eggs a day.)

We finally had a sunny day today. A doe crossed the lawn past our patio this afternoon and the four bachelor turkeys came by. Breeding season is over so their heads are no longer bright red and their snoods have shrunk. Most noticeably, they don't gobble anymore. I haven't seen any of the seven female turkeys for over a month. They are safely hidden away somewhere. Maybe they're all mommies by now.

I was going to remark you have quite the assortment of fauna around your home, then noticed fauna is one of your labels. Chickens are such personalities. Sort of like little turkeys.

What fun and lively neighbors. Great picture! We're back in umbrella and rain coat weather.

Awwww....how sweet! It is so nice that you really wanted to "meet" the chickens and that your neighbour was happy to show them to you. They sound like sweet birds. I always enjoy reading about your meetings with animals.

There is something very exciting about gathering a chicken egg that is still warm. I did this many times when I still owned the farm. That's about as fresh as one can get with eggs!

I can't help but see raptors in their decline whenever I see a hen!

How lovely to have freshly laid eggs. So much nicer than the ones from most supermarkets. Jx

How beautiful Miss Red is! I so wish we lived in an area that I could have chickens--I love fresh eggs, XOXO

I love the way hens like to assist with the gardening. (Our girls have taught Toby Too a few lessons, they go into attack mode when they see him, which is exactly what is needed to curb his desire to chase them!)

I'm so glad you get to see so much wildlife in your neighbourhood - especially the doe.

Cluck cluck, a beauty of a chicken.

Glad you met the Rhode Island girl and her friend :) Oh soon Ms Sparrow those turkey hens will be bringing you a parade of chicks ...and mark my words I mean parade. I am sure you will let us know when it happens :)

Aw, your neighbor sounds cool! I love that she keeps chickens. And your posts about the wildlife in your neighborhood always make me smile.
:-)

We have chickens all round us which is fine but the roster up the back is not so popular.
Merle......

Rhode Islands Reds are gorgeous! What a lovely day you had . . . and it's nice that the turkeys are back . . . it won't be long before you'll be a granny again, I hope, with pics to share.

We're in for dreadful weather later this evening. I've never seen such extremes in weather, and it keeps getting worse.

what a handsome chicken, how nice that you got to meet the neighbours like that!

What a joy your neighbor must have gardening with the chickens to keep her company, I hope you get to see some momma turkeys soon

I find this all so fascinating (and so foreign). At first I thought the "neighbor lady" was from Rhode Island!

The wild turkeys around here are all raising their youngsters right now!

I love gardening with chickens, especially when I'm digging around in the vegetable garden. They get so excited at what I turn up in the soil. :)