I had my first four-hour shift in the Avian Nursery last night at the Wildlife Rehabilitation Center. The nursery is in a large, very warm room lined with incubators for the smallest baby birds that are coming in every day.

In one of the artificial nests are four tiny house finches who were brought into the center last week. A family had been cleaning their yard and took down a Christmas wreath and threw it into a bonfire. Only then did they see that a mother bird had built a nest in it with the four baby birds. They were quickly rescued and brought into the center. If their enthusiastic cheeps and appetites are any indication, they will do very well.

They are kept in an incubator inside a plastic box half the size of a shoe box. Inside the box is a hand-knitted nest and inside that nest is very soft bathroom tissue rolled into a cone into which the birds are nestled. They are fed a special formula with a syringe every 15 minutes from morning until night.  The older birds are fed every half hour. When they are ready to fledge, they're moved to large outdoor cages before they're released.

The Avian Nursery is only 10% filled now, but in the coming weeks, it will be filled to capacity as more and more little birds are orphaned and abandoned--or mistakenly believed to be. 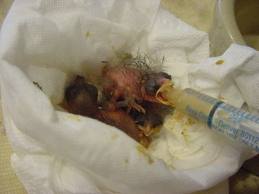 Oh MY! A face only a mother (or a kind substitute Mom) could love. What a wonderful place that is... you are so generous in giving your time there. A couple of years ago we "raised" a baby robin... you should have seen me out catching grasshoppers to feed that hungry little guy.

What a sweet post! I love the photo...and, of course, I love birds!

Takes me back to the days of feeding little bald blue chicks when we lived in Banham Zoo!

What an incredible thing for you to do! Rewarding for you, I'm sure. Very admirable and so heart-warming.

What a great way to help the birds! You're right, the babies are anything but beautiful, but they do seem to be engineered for efficient eating!

It had to be you, moving on from turkeys to finches. I hope you can help every bird who needs your help. How busy, feeding the finches every fifteen minutes! I remember the constant attention my finches gave their babies.

They are beautiful, just born.

What a great job you have, so glad you are doing this for all the birds.

LOve this Ms Sparrow Great job. I too use yo and feed baby birds ust like you show at the last picture. So amazing how fast they grow.