I haven't seen my turkey troup for a full week. They disappeared into thin air and I miss them.

The odd thing is that they left the day after I finished reading "Illumination in the Flatwoods" by Joe Hutto. Hutto is a naturalist who spent a year living with a flock of imprinted turkeys. He hatched them and lovingly "mothered" them all day, every day until they grew up and moved on.

I first learned about Hutto's experience from a PBS Nature series documentary called "My Life as a Turkey". I totally identified with his affection for the big birds and their fascinating day-to-day experiences in the Florida Flatwoods. 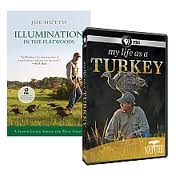 I'm so thankful that I had the benefit of his knowledge when they left. He relates how abruptly the flock's behavior can suddenly change. I'm trying to hold onto the belief that they just had the urge to move on.

I don't mind not having to keep up with feeding them at dawn and dusk each day, but I worry that they might not be getting enough to eat wherever they are. I also worry that something awful happened to scare them away.

So, I keep waiting for them to come back. Whenever I go outside, I look for their tracks in the new-fallen snow. And I miss them. 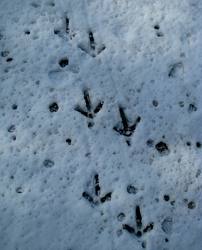 (I debated whether my turkeys form a troup or a troop. I looked it up and troop refers to soldiers or Scouts and troup refers to a group of entertainers, so actually neither term applies.)
Posted by Ms Sparrow at 12:58 PM

They might return... we fed the turkeys and deer when we still lived on the farm. The turkeys were totally unpredictable. Especially this time of year during breeding season. Maybe they'll return with a dozen poults!

I know how you feel, but Mother Nature is their guide....they will be fine.
Jane x

What a good relationship, brilliant.

I saw that documentary on TV and loved it. I hope the turkeys are well.

No fear. They will turn up. They remind me of teen age boys hanging out, looking for some fun.

Odd Essay: Yes, I have had worries about that too!

Bob: I think the fact that I could be within a few feet of them made the relationship much closer.

Linda: Wasn't it great? I still have it saved in my DVR.

Joanne: I'm sure you're right. I had just come to feel like they were totally reliant on me and they obviously were not!

Crafty: I'm sure there will be turkeys in my future one way or another!

I noticed our turkeys would disappear in the Spring too and then, reappear in late summer. I think they're nesting??? Happy St. Patrick's Day, dear friend, XOXO

I wonder if they'll be back at the same time next year... Jx

Hope they are all well.

Oh Ms Sparrow,
I think they were definitely a troop ~ that being a group of lovely entertainers ... when you showed them on your blog ~ they certainly entertained me ;) I am certain they are well and the "troup" is just out scouting new territory for a while.

Janice, I really enjoy reading your posts about the turkeys. Great photos, too. Hopefully they will return soon!

Hello Ms Sparrow....When I wrote my Wild Turkey post, I thought about you. I do believe they are happiest when they can live in the wild and take care of themselves. I hope you find comfort in that thought. They will do fine and probably find another rafter of turkeys to mingle with. Who knows, they may return next winter....

I think they're just called a "flock." But troop or troup does sound much better. Or maybe a team... or a tribunal...

Fascinating. My troop marches single file up the blacktop in front of our house. Then one by one sneaks past the goats to get the spilled corn next to the feeders. Like an invading army....:)

There are so many interesting people out there! I would have never though that someone could hatch and raise a group (troop?) of turkeys!

I hope your turkeys do return. Perhaps in the fall?

Thanks for stopping by the other day. I know I've been absent lately :)

Our turkeys are still coming every day. I very much liked that book and documentary!!