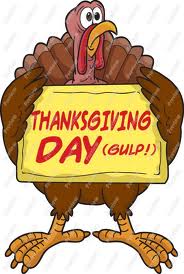 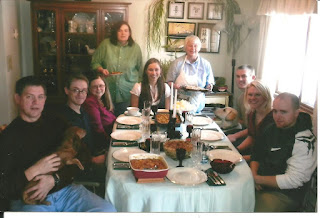 Lovely! Your missing turkeys may show up yet, and if not, the others appreciate the extra rations.

You have a wonderful window onto the world of wildlife, not to mention a great holiday menu!

I love critters.... but since we've been at our daughter's (about a MONTH now!) have had only 1 goldfinch and 1 housefinch at our feeders. We did see 4 cardinals this morning but they didn't even stop by for a black oiler!!!! I hope your turkeys come back... I will tell you though, that one Thanksgiving (I always had the huge family get-togethers) my niece brought a turkey that her husband had got (bow-hunting) and that damned thing was the toughest bird I EVER tried to chaw down on. It was like jerky ;-) Love your take on the world!!!!

A lovely post. I love animals, their company is so rewarding. Thank you so much for sharing.

I love your thoughts for protecting the turkeys. Your gathering looks so inviting; I miss those times at my mom's. Happy Thanksgiving, XOXO

Hey Ms Sparrow - nine people, eight place settings ... don't you dare tell me that the cook sits somewhere else after all of that work!

Fun! I grew up on the East Side (Daytons Bluff overlooking the airport) but we never had wild turkeys wandering the neighborhood).

I would be happy to sit at your table on Thanksgiving Day. Your choice of menu fits what my family has cooked for years. By the way, our turkey is store bought...laughing!

In California we had a whole group of turkeys in the country and they strolled around like they owned the town after a while they all disappeared, sorry to say, I hope at least a few of yours make it to carry their family to the future.

Joanne: Yes, they are all well-fed!

Blissed: I love having the little woods to watch. Because the lot is lower than street level, it was surrendered to the city by the owner and will remain as woods. I'm thrilled to be so lucky to be next to it!

Essay: I wondered if wild turkey wouldn't be tough. Good to know!

Linda: I agree! I often go to my window to see what birds and animals are there.

Susan: I hope my family all feel that way too. As the grandma/matriarch, I feel like I'm in a privileged position to create memories and traditions. It's kinda humbling, but then, I'm mostly just passing on those traditions from my childhood!

Owl: Aha! You counted! Actually, my roommate Sue chooses to sit by the coffee table and eat. Kind of you to consider that.

Troutbirder: I have been to Dayton's Bluff area. I wouldn't be surprised if there are turkeys down in the Swede Hollow Park nowadays.

Meggie: I sometimes feel like the menu is old-fashioned but my family wouldn't have it any other way. Since we only get to enjoy those foods once a year, that makes it special.

Linda Starr: This morning when the turkeys came around, the boys were getting frisky around the girls. If they all have broods next summer, we will be swamped with turkeys! So far they're a little wary of people and cars.

"If you feed them, they will come"

Truer words were never spoken. Our back yard that borders the creek and a flood plane has proved that. Besides the regulars; 10 feral cats, 17 raccoons, 2 possums,6 box turtles, squirrels and birds, we do get an occasional bobcat, owl, etc... (used to get coyote until we put up the 6ft fence).

Rian: What a lot of mouths to feed!
I can't believe you get that many raccoons. I feel sorry for the feral cats but at least you are there to supplement their diet. You are my kind of gal!

If it makes you feel any better, we had a local hunter tell us that wild turkeys are incredible difficult to hunt. So hopefully that's not where yours have gone. That said, my neighbours' German Shepherd cross bags them regularly!!!

lovely to have so many animals visiting your garden!

Wow, I wish we had so many wild things visiting! here in NZ, the possum is an introduced pest and virtually decimated the native birds. They are now controlled and the wildlife in our city is prospering. How funny having wild turkeys visit. I thought they were all domesticated these days. Thanks for the window on your world.

You have a very kind heart to care for the wildlife and feed them. We don't have a lot of wildlife near our home. We do hear coyotes and actually had 3 runs through our back yard this summer...while we were sitting out there. And we have a bird bath and enjoy watching the birds.