Soaking up nature all over the place

I thought the bear at the picnic table was so cute, but I watched an Animal Planet show about people who feed wild animals. This elderly woman had fed bears until she had hordes of them coming to her wilderness home. Finally, one of them killed and ate her--so don't start feeding your neighborhood bears!

I also watched a PBS Nature show about crows last night. I knew they were intelligent, but was still surprised at all the things they can figure out. They are watching us and can even recognize individuals. I had once jokingly told a friend that all the crows chattering in the trees in the block around us were talking about her--now I'm not so sure they weren't!

The robin migration seems to have ended. I haven't seen any for a few days. In fact, it's eerily silent outside.
Even the squirrels have slowed down in their fall harvest. All the black walnuts are gone from the tree and they've gone back to raiding the neighbor's garbage pail. 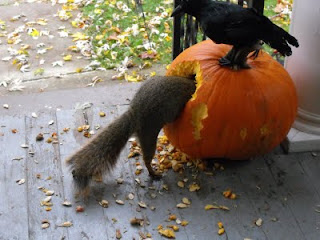 There's a church several miles from here that sells pumpkins in their parking lot every year. After Halloween, there are always some broken ones remaining. We stop and pick up a few to toss into the wooded lot for our resident squirrels. (We used to feed them on our patio but the Condo Assn fined us for it.)  I'm just so grateful for that lovely lot in so many different ways.

I snitched this picture from a blog last year because it was so cute. Crows and squirrels are fairly tolerant of each other, but the crow in the picture is a fake.
Posted by Ms Sparrow at 5:08 PM

You could have taken that photo outside my front porch. We too put out pumpkins, whole though. As the winter progresses, I watch as the squirrels gnaw through the frozen pumpkin to to the "prize" inside. Come spring there is nothing left.

That's a terrific photo of the squirrel in the pumpkin! I've got more of your posts to read so the "bear at the picnic table" will probably make sense when I get to that post. That is so awful about the bear eating that poor (but stupid) woman.

The squirrels around here are chattering their heads off...don't know what they are fighting over, and probably don't want to know! Love the photo...and I think it's really funny (or sad?) that your condo ass'n fined you for feeding the squirrels! Good that you have a wooded lot nearby!

Nice they've got you to give them some morsels when the weather turns cold. I've read some great stories about crows and how intelligent they are, even recognizing people as you say.

I didn't know that crows were so smart! I will be watching out for them now:)