This is a rerun of a posting from back in 2008. I didn't have any followers at the time and I was clueless about how to get some. So anyway...

I've been getting some recorded telemarketing calls lately. They start out, "Do not be alarmed!" (They go on to offer some credit card insurance.)

This is so devious. How better to get you to listen to the message than to imply there is danger!

I don't know about you, but I don't have nearly enough danger in my daily life. My adrenalin level remains pretty constant. The most hazardous thing I ever do is back the car out of my tiny garage--and I have the dents to prove it.

The only wild animals I encounter are the opossums that I feed on my patio. There are also voles, squirrels and a few raccoons that come around, as well, but the 'possums are the stars. This is because they are newcomers.

Possums are common to the South, like armadillos. Because of Global Warming, however, they have been working their way north over time. And now, I am privileged to have my very own tribe.

Their arrival each evening is an eagerly anticipated event. The three cats and I sit inside the patio door and watch them eat the jelly or peanut butter sandwiches, meat scraps, fruit and whatever. The possums ignore us even though we're only a foot away.

I never know which ones will show up, but they always come separately. The first one was a big light-colored one with pretty pink ears that I promptly named Petunia. Next came Tank (a solidly-built little fella), then Elvis (a young one with small black ears). Last night, a new one appeared with a torn ear and 2-tone tail, so he became Rocky. The gender assignments are arbitrary, of course, and naming them is pure self-indulgence. 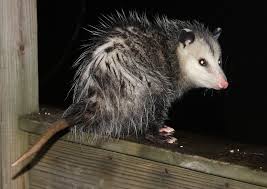 Now that the snows have come, I'm worried about where they've holed up for the winter. The poor things are not well-adapted to Minnesota with their naked tails and sparse coats. I worry about them--and so I feed them.

After, they face real danger every day!
Posted by Ms Sparrow at 6:47 PM

I love the names you've assigned them and hope they're still coming ' round.

The worked they way up the Niagara peninsular (brave wee things)into Ontario! They were often admitted to the rehab center (where I interned)with frostbitten ears,or as babies from their roadkill Momma's pouch.I always loved them ...Canada's only marsupial.
Jane x

Hi Ms. Sparrow, I never get to see opossums in my area. I have to admit if I did see one it would make me a bit nervous, but this is because I have seen them on wildlife television shows and have seen them hiss and bare their teeth. :) I bet they appreciate the food you give them.

We had one ringtailed possum turn up since we moved in here 22years ago he ate all the fruit off the tree and moved on and hasn't been seen since.
Merle....

I hosted a family in my garage one winter, snug on a shelf. Eventually I moved the cat food indoors and they moved on. Safer, as we used the garage ourselves.

They do have long snouts and lots of teeth, but I think they are handsome. We had one that had a very large head and another once that had 3 ears (2 regular and 1 tiny). Yes, I began to wonder what was being dumped into our Texas creek). But I love it when the babies show up. The funny thing is that they show up individually - not running beside the mama (like raccoons do).

Mine feed on the seeds underneath the bird feeder. When Baron is cooped up that is....

What do you feed them? They can be quite nasty I've heard, we once had one in our old farm house in Arkansas and had a hard time extricating him, he was eating our cat's food and sleeping in cat's bed. Ha.

When I lived in Minnesota I remember someone saying that there were no possums that far north. I thought that was strange--growing up in Indiana possums were commonplace and I just assumed they were everywhere, like raccoons. Now I live in the Deep South where the possums grow to gargantuan size!

I like the idea of reposting old blog posts. I've had readers come and go over the years, so I'm sure no one would notice if I dug through my archives and posted something from back in the day. I may borrow your idea (if you don't mind, that is!) :-)